The Health Benefits of the Human-Animal Bond (Part 1) 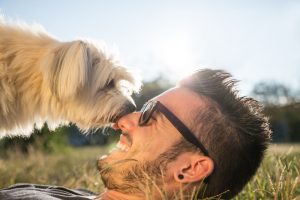 Pet owners enjoy a wide range of benefits from living with pets – companionship and entertainment are top among them – but emerging research is proving there are actual measurable health benefits for those who share their homes and hearts with a pet.

Anthrozoology is the study of human-animal interactions. The body of evidence is growing which demonstrates the profound positive impacts of pet ownership and even simple exposure to animals in a wide range of situations. Would you believe a person’s likelihood of survival one year after a heart attack can be improved by pet ownership? Would you believe elderly individuals enrolled in a walking trial walked farther, faster and more frequently when accompanied by a shelter dog compared with a human walking partner? Let’s explore more fascinating examples.

It has been well documented that pet owners have superior heart health: lower blood pressure, a lower resting heart rate and a faster return to normal after a stressor on the heart. Combine that with a reduction in cholesterol and triglyceride levels and the benefits just keep stacking up! There are a few theories to explain these findings. One might be that pet owners, and perhaps dog owners who walk their dogs specifically, have decreased sedentary time and increased periods of aerobic exercise. Another theory holds that our daily interactions with pets constitute such a system of social support that pet owners are better able to manage and tolerate the effects of stress in our lives.

In a 2008 study, seniors were paired with either a shelter dog or a human walking partner and across the 12-week study, those who walked dogs improved their walking capabilities by 28% compared with only 4% for those who were joined by another person. The dog walking group increased their speed, distance, and frequency of walks, stating they had increased motivation because of their canine companions. Also documented is that pregnant women who owned dogs were statistically more likely to meet national guidelines for activity and exercise than those who were not pet owners. Let’s not forget the benefits of a playmate for children! In households with a dog, there are reported higher levels of physical activity and lower levels of obesity among children, and in some studies, all family members.

Allergies and the Immune System

The effects of pets on one’s immune system are harder to measure and study. There is evidence to support the theory that exposure to microbes from pets helps to prime and activate the immune system in beneficial ways. In one study, children in pet-owning households had fewer sick absences from school, amounting to three weeks of additional instruction. Additionally, it appears the likelihood of developing an allergy to pet species is reduced with early exposure to those animals. Depending on the age of exposure to pets, there appears to be a protective effect on the respiratory system. Fewer allergies and less wheezing are documented in children raised among pets. 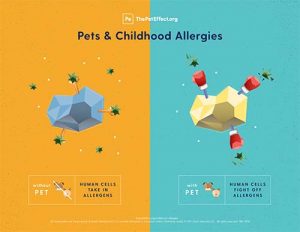 Interacting with an animal – not even your own pet necessarily – results in a measurable decrease in levels of cortisol, which is a stress hormone. It seems that a positive interaction with an animal boosts our levels of oxytocin, a hormone associated with bonding and affection, which counteracts the effects of stress on the body and mind. In one study, children who had recently undergone surgery reported less physical pain and less concern about their level of pain after interacting with a dog in the hospital environment. High levels of stress can impair immune function and early studies suggest that animal interactions in medical environments could improve health care outcomes.

Among the senior population, those who own either a dog or a cat are statistically more capable of a range of activities summarized as “activities of daily living.” These skills include climbing stairs, bending, kneeling, stooping, preparing meals, bathing and dressing, and correctly taking medication. It is thought that through caring for a beloved pet, they practice these same skills and concurrently keep themselves healthier and more capable as well. Similarly, a study focused on teens with Type 1 diabetes and found that those assigned to care for fish and their feeding schedule, water purity and overall tank health had improved discipline with managing their own diabetes. Again, caring for a pet modeled some healthy practices for keeping ourselves well. Likewise, in a pediatric cancer study, the presence of therapy animals yielded better adherence to a treatment protocol and a higher motivation to get better and remain optimistic.