An Unusual Case of Pyrexia 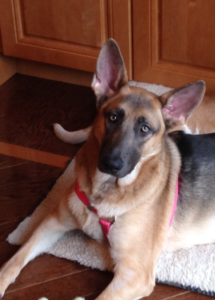 A 6-year-old FS German Shepherd dog (pictured) presented to Dr. Jill Sammarco with a 3-week history of decreasing appetite and energy level.  She did not eat or move much the 3 days prior to presentation.  She had 2 episodes of urinary tract infection treated with oral antibiotics several months prior. She also had a history of bilateral elbow and coxofemoral osteoarthritis.  At presentation she had a temperature of 105.3 F, with 7% dehydration, no murmur. The only other significant finding was mild elbow discomfort. A cardiac evaluation with an echocardiogram was normal. She was admitted to the hospital for IV fluids.  Oral cephalexin and Rimadyl were started, a CBC, serum chemistry, 4DX urinalysis and urine culture were submitted.  She responded well, her temperature normalized, and she was eating in hospital overnight. She went home the next day on cephalexin and Rimadyl. Blood work, 4DX and urinalysis and culture were not remarkable.

She had some mild improvement for about three weeks but represented and a consult with Dr. Melissa Marshall was done. She had continued lethargy and inappetence, occasional vomiting, and persistent pyrexia at 105 F.  Further diagnostics were planned. 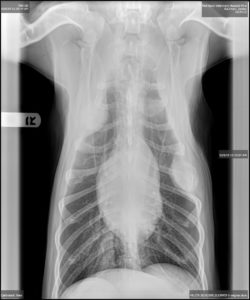 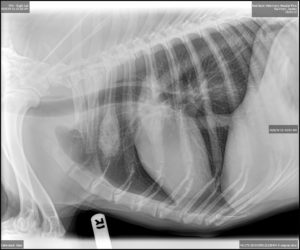 Abdominal radiograph  revealed a widening of the disc space at T12-13 with irregular margins and sclerosis of the adjacent endplates. 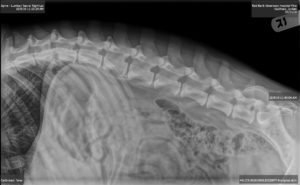 Differentials for the polyostotic aggressive rib lesions and discospondylitis included an infection process (fungal vs bacterial) although a neoplastic process particularly in the ribs could not be ruled out.  Abdominal ultrasound by Dr. Fernando Castro revealed a focal mass-like area of asymmetric colonic wall thickening in the descending colon, possible neoplasia or granuloma. FNA and cytology of a rib lesion and the colonic mass were performed.  The colonic mass aspirate showed chronic inflammation but no underlying cause.  The rib mass aspirate showed osteoblastic proliferation with mild atypia.  Biopsy of a rib lesion for histopathology and culture was recommended. Following biopsy, she was started on clindamycin and enrofloxacin. The rib histopathology revealed osteomyelitis with intralesional bacteria (rods), no fungal elements.  Culture of the rib resulted in a heavy growth of Salmonella spp.

Based on culture sensitivity, we discontinued clindamycin used just enrofloxacin.  Within a couple of weeks she had improved significantly to near normal appetite, energy and activity. Her final diagnosis was Salmonella discospondylitis and osteomyelitis.  We anticipate continuing the enrofloxacin for 6 to 12 months, and performing repeat radiographs in about 4 months.  The significance of the focal colonic wall thickening is still unknown.

Salmonella species as a cause of discospondylitis is unusual but has been reported. Staphylococcus, Streptococcus, E.coli and Brucella spp are more common , and German Shepherd dogs may be susceptible to discospondylitis from Aspergillus spp.  Material for culture from the disc space could have been aspirated, but we are assuming the osteomyelitis and discospondylitis have the same causal organism and we have seen clinical improvement.  Rib osteomyelitis is also rare, and most likely due to hematogenous spread in this case.

A common source of Salmonella is the diet.  A thorough diet history should be obtained.  Although a raw diet is commonly associated with Salmonella, other sources include pig ears, bully sticks and occasionally commercial diets.