The Health Benefits of the Human-Animal Bond (Part 2) 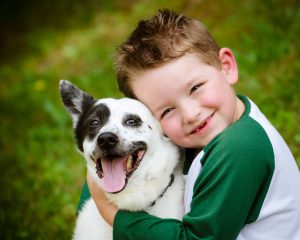 There are a staggering number of emotional, social and mental health benefits that correspond with pet ownership. Benefits are seen from the youngest to the oldest members of society, from those with diagnosed disorders and others with quite varied life experiences.

Having a pet in the household is believed to assist with teaching attachment, responsibility, empathy and a sense of stewardship for wild animals and nature at large. They also teach us about the cycle of life. Children’s innate interest in animals makes them excellent teaching tools for learning about any topic, hence why animals are so commonly found in children’s literature, games and toys, and audiovisual content. A Dutch study found that curiosity about animals ranked in the top four searches of the internet by children. And many cross-cultural studies have identified that “dog” and “cat” are among the most frequently occurring words spoken by infants. This tells us how important these creatures are, even to our youngest family members. But pets are also a critical form of social support for growing children. Seventy-five percent of respondents aged 10-14 reported that they specifically sought the comfort of their pets when they felt upset. Some children even ranked their relationship with a pet higher than some human relationships within their social network. Pets are confidantes and provide an unlimited supply of non-judgmental comfort and support.

Interactions with animals have been noted to improve critical areas of social functioning. In the presence of an animal, there was improved focus and attention and noted decreases in self-absorption and repetitive behaviors. Children with autism who played with classroom guinea pigs remained calmer and had increased engagement with their peers. Those with ADHD who were invited to read to a therapy dog during a 12-week study demonstrated increased sharing, volunteering, and cooperating. This insight may provide a needed bridge to assist with motivation, learning, and success with certain tasks. 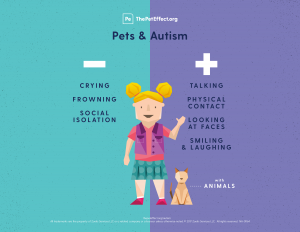 Veterans and others who have experienced abuse or trauma can suffer terribly from PTSD. Service dogs are now being trained and paired with those suffering in order to promote feelings of safety and limit social isolation. The dogs can be trained to create a personal-space boundary between their handler and the public which increases feelings of security. Also, the dogs are very alert to changes around them and the handler can reduce their personal hyper-vigilance and learn to rely on the dog. Equally, great success has been shown partnering veterans with shelter dogs who need to learn basic obedience training. This increases a dog’s adoptability and uses the talents of the service member constructively, helping them to adapt to being back in civilian life. 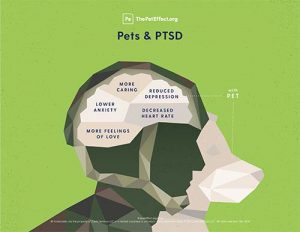 A study demonstrated that when a dog resided in a long-term care facility for individuals with Alzheimer’s Disease, both health care providers and residents benefited. There was an increase in calmness, improved social interactions and fewer problem behaviors noted. And of the population of patients still living at home, those in households with pets suffered fewer mood disorders and fewer episodes of aggression or anxiety. Where an aquarium was added to the dining room of a residential facility, nutritional intake and body weight of the patients increased significantly. What profound impacts sharing our lives with animals can have!

Whether one is mourning a human or a pet companion, having a continued pet presence in life is proven to be beneficial. A study of widows found that those with pets experienced fewer symptoms of physical and psychological disease and reportedly required less medication. Particularly among the elderly who may have fewer social connections, in the bereaved, and those who are pet owners had less depression.

We’ve already heard about the benefits of therapy dogs in assisting with children’s reading and further participation in school, as well as in supporting pediatric cancer patients in their pursuit of wellness. Therapy dogs are also used to teach mindfulness. It has been found that dogs are very good at living in the moment and directing all their attention at a single person, food item or toy. These traits can be used to help teach people about attentiveness, directed ambition and compassion. Other times, therapy dogs are present in physical therapy sessions or social work environments and serve to improve people’s motivation to reach goals.

We might presume we know the benefits of working animals for those they are partnered with, such as guide dogs for the blind, seizure alert dogs or trained primates who assist individuals with paralysis. Certainly, these animals do improve people’s independence and quality of life. But they also provide social support in perhaps unexpected ways. In a study of wheelchair-bound individuals, those accompanied by dogs had a median of eight friendly approaches from strangers, versus only one approach on trips without a dog. Also, people passing the dog-assisted person were more likely to smile, acknowledge and converse with the person compared with those not assisted by an animal. (This effect can be seen among people in general – those walking with a dog are much more likely to engage others and be approached than those who are walking alone.) People with working animals report decreased loneliness and improved self-esteem. Engagement with the community around us is a nice “side effect” of having an assistance animal!

Can the presence of animals draw a whole community together? You bet! Walking a dog is a tremendous catalyst for conversation and engagement between many members of a community. The ease with which we can relate to one another as pet owners transcends a vast number of social obstacles that might otherwise create division among people. Social capital is a term that refers to “the glue that binds people to their communities and reflects the value of all relationships with a community.” Social capital builds up when people interact with one another and we see the health benefits of lower mortality and better physical and mental health in communities with strong social capital. Even people who do not own pets report that having pets improves socialization within the community. That dog park is not merely for the dogs’ well-being, it promotes connections and relationships, conversation and engagement, and even inter-reliance as people discuss their pet concerns or solutions they’ve devised.

For the elderly, that social capital might be even more important. As people age, their social connections tend to weaken and individuals are at risk for loneliness, depression and decreasing capability. But with a pet, people report more interactions with friends and strangers, stronger self-reliance, and maintenance of their abilities. A study also found their conversations were more focused on the present, rather than the past, which could have a positive impact on mental health. There is more laughter and responsiveness in older people in the presence of a pet, so even if an individual cannot take on the responsibility of their own pet, they can benefit from the animals in the community around them.

But Wait… Not a Fur Person? Get a Fish!

Luckily, many of the benefits of being around animals can be enjoyed informally (without owning the pet itself) or from animals you may not yet have considered! Attention to an aquarium results in increased endorphins and dopamine (which make you feel calm and relaxed), reduction in the stress hormone cortisol and reduction in heart rate. In one study, there was decreased muscle tension and increased skin temperature (which relates to improved blood circulation) associated with watching fish swim in an aquarium. We gain so much from inviting animals into our everyday spaces!

Over sixty percent of American households have a pet – and with all we’ve just learned about how those relationships benefit our physical and emotional health, as well as our community at large – thank goodness! Our pets might help us solve some big problems like the obesity epidemic and the tendency toward an inactive lifestyle. The CDC (Centers for Disease Control) promotes pet ownership for the physical health benefits, emotional benefits and increased opportunities for exercise, socialization, and community-building. It’s hard to fight the data that shows that pet owners have greater self-confidence and self-sufficiency. Continue to watch as the field of anthrozoology progresses; there are dozens of new studies reaching into ever-more interesting areas of our lives and lifestyles.

Do you have a health goal? Do you want to increase your physical activity – walk a dog! Volunteering at a shelter to walk dogs initiates a whole cascade of benefits for yourself and that animal. Do you need to reduce stress? Take it really easy… just sit back and watch the fish swim by! We all stand to gain from the benefits we get from sharing our lives with animals.